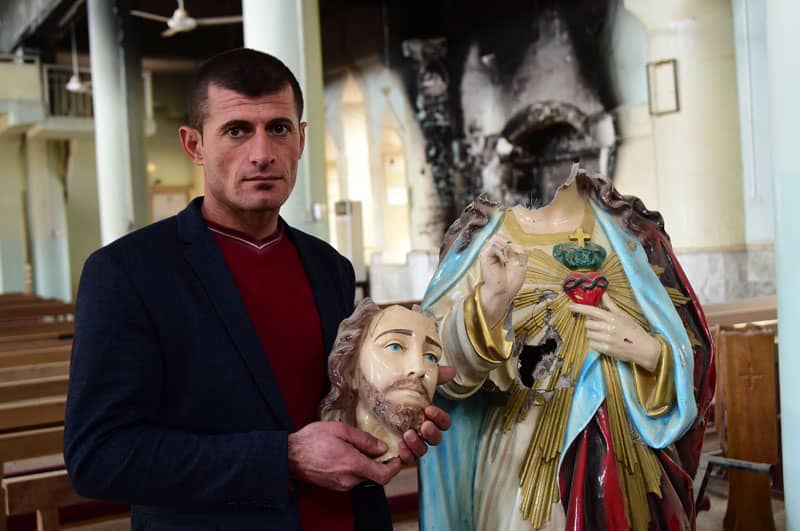 In recent years, Christian persecution has been sharply on the rise, and its terrible impacts have only begun to be felt. In fact, according to Pope Francis, conditions for Christians are worse now than they were in the days of the early Church.

The merciless targeting of Christians—driven by hatred of Christians and the faith itself—emerges as a common denominator in hundreds of testimonies of persecution received by Aid to the Church in Need (ACN) from countries around the world. As a Catholic charity providing emergency aid and pastoral support to the persecuted and suffering Church in 140 countries, ACN is committed to chronicling and assessing the evolving phenomenon of the persecution of Christians around the world today.

Today, according to ACN research, almost 340 million Christians around the world—or 1 out of every 8—live in a country where they suffer some form of persecution, such as arbitrary arrest, violence, a full range of human rights violations and even murder. ACN is documenting this violation of religious freedom in two biennial reports, “Religious Freedom in the World” and “Persecuted & Forgotten?”. The research examines conditions in 196 countries. Open Doors puts the number of Christians murdered for their faith in 2018 at more than 4,000 and reports that at least 11 Christians are killed every single day in the 50 worst-offending countries.

The most recent edition of “Persecuted & Forgotten?” covers the period 2017-2019 and finds a sharp rise in Christian persecution in South and East Asia.

It must be noted that some groups monitoring Christian persecution around the world put the number of Christians suffering various forms of persecution as high as 600 million; the Pew Research Center has reported that the number of countries where Christians are subject to a degree of government-enforced restrictions and communal hostility has grown from 108 in 2014 to 128 in 2015 and to 143 in 2017.ACN’s most recent research shows that between June 2016 and June 2018 particularly grave violations of religious freedom took place in 38 countries, in 17 of which minority faiths—and Christianity figuring most prominently among them—suffered instances of severe discrimination; in 21 nations ACN found evidence of outright persecution, even to the point of death.Radical, extremist Islam is responsible for the persecution of Christians in 22 of the worst-offending countries.

Thomas Heine-Geldern, executive president of ACN, said that “Pope Francis, as well as his immediate predecessors, have all stressed that religious freedom is a fundamental human right rooted in the dignity of man. It is the purpose of [these reports] to draw worldwide attention to this intrinsic link between religious freedom and human dignity.”

The precise number of Christians who are killed because of their faith remains unclear; reports showing a fall in the number of deaths during the period June 2015 to June 2017 to below 100,000 still show that the level of violence aimed at Christians remains severe.  The most recent mass killing of Christians happened in Sri Lanka, when, on Easter morning 2019,  some 150 Christians died in strikes by suicide bombers at three churches.

ACN research is showing that Christian persecution is most sharply on the rise in South and East Asia, in countries like Myanmar, India, Pakistan, China and North Korea. That region is now the hot spot for persecution, taking over that dubious honor from the Middle East. Across Africa, jihadist violence against Christians remains at critical levels. For example,  ISIS affiliate Boko Haram has perpetrated genocidal attacks targeting Christians in northern Nigeria. In the last few years, the group has suffered significant military defeats and the loss of territory it held, but remains a danger to Christians. The focus is now on the attacks by Muslim Fulani herdsmen on Christian farmers in Nigeria’s Middle Belt, with many observers pointing at the herdsmen’s sophisticated weaponry as a sign the attackers have financial backing. Some speak of an effort to Islamicize the country. In Nigeria nearly 3500 Christians were killed because of their faith in 2020.

Increastingly, the whole of sub-Saharan Africa has been targeted by Islamist extremists–some groups financed by Gulf States–with Christians most often singled out for wanton killings. The Central Sahel has suffered the greatest increase in militant Islamist group activity of any region in Africa. Extremist attacks in Burkina Faso, Mali, and Niger increased from 180 incidents in 2017 to approximately 800 violent events in the first 10 months of 2019.

2020 saw the rise of significant trends in Christian persecution and religious persecution overall:

Christians held in captivity because of their faith

According to research by Aid to the Church in Need unjust detention of Christians—most often under deplorable and cruel conditions—is emerging as one of the most prevalent, enduring, and serious forms of Christian persecution.

Research shows that every month, in the 50 countries where it is most dangerous to be a Christian—countries like Pakistan and China—an average of 309 Christians are unjustly imprisoned. From Asia and the Middle East to Africa and parts of South America, thousands of Christians are unjustly detained for their faith.  Many suffer in complete silence, while women suffer the additional violence of rape and other sexual abuse in captivity. In 2019, there were 1,052 known cases of Christians being abducted, be it by governments or non-state actors, like Boko Haram in Nigeria.

In almost all the worst-offending countries, the situation for Christians has declined since 2015 as a result of violence and oppression. The one exception is Saudi Arabia, where the situation was already so bad it could hardly get any worse.