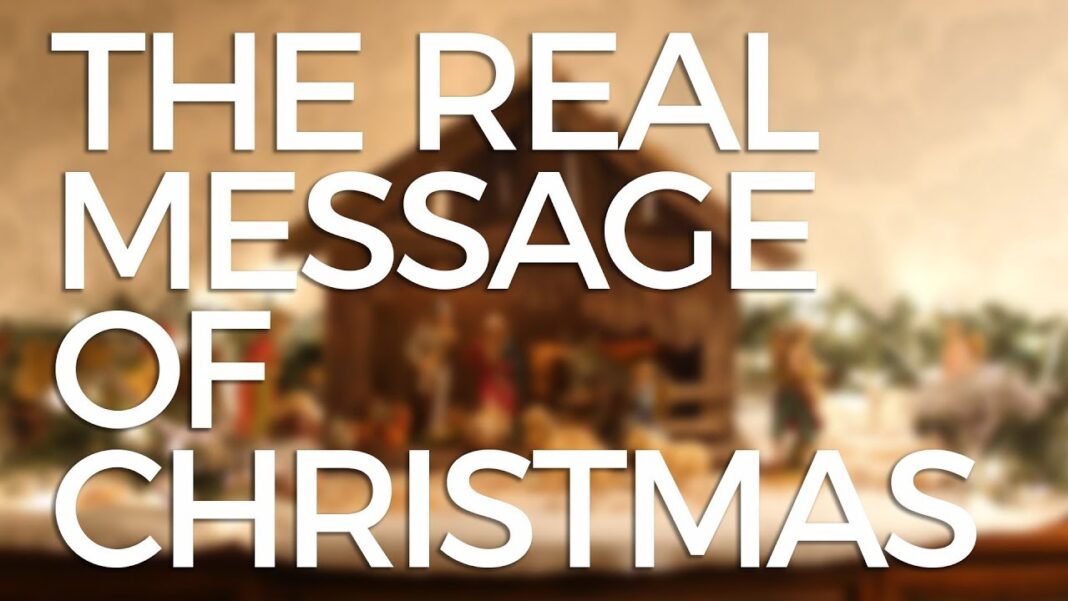 The Christian takes his guidance from God’s word and not form what the world thinks or does. That is very important when it comes to Christmas. It wouldn’t take us very long to make a long list of what the world teaches about Christmas. At no other time of year are worldly values more manifest than right now.

It becomes the task of all true Christians everywhere to speak forth, by words and actions, the real message of Christmas.

When we go to Bethlehem and look into that manger, what do we see? What messages is broadcast far and wide from these humble servants of God from ancient times?

The real message of Christmas is about the incarnation of God; Emanuel, God with us. That is the central idea of Christmas. It is not just one of many things we can say about the birth of Christ, it is the key fact, the redemptive fact about Christmas.

The fact that God came to this planet 2000 years ago, became a baby, born in Bethlehem, cradled in the arms of his mother Mary, reveals some startling truths about the nature of God and his deep passions for mankind.

The real message of Christmas can be seen in the following five points.

CHRISTMAS PROCLAIMS A MESSAGE OF LOVE

“For God so loved the world that he gave his one and only Son, that whoever believes in him shall not perish but have eternal life.” Jn 3:16

“The Lord said, “I have indeed seen the misery of my people in Egypt. I have heard them crying out because of their slave drivers, and I am concerned about their suffering. So I have come down to rescue them from the hand of the Egyptians and to bring them up out of that land into a good and spacious land, a land flowing with milk and honey.” Ex 3:7-8

CHRISTMAS PROCLAIMS A MESSAGE OF SELF-DISCLOSURE

God was not satisfied to speak his word from afar, to talk about his nature and will to a distant creation.

“The Son is the radiance of God’s glory and the exact representation of his being.” Heb 1:3

The perfect means of revealing all we can comprehend about the mind and heart of God.

CHRISTMAS PROCLAIMS A MESSAGE OF SINGULARITY

When we see that baby in the manger of Bethlehem, we are looking at the only provision God has made for the sins of the world. There’s only one way for humanity to be rescued from its dark impending judgment.

It is natural for men and women of the world to believe that “all paths lead to heaven.” That’s thought to be very sophisticated today.

This person feels that God loves all religions and those struggling to find their way to him. They are confident that God loves the sincerity and the effort expended in the search and will reward this work with eternal life.

He is of the opinion that the Christian is arrogant when he so blindly and ignorantly claims that his way is the only way to God.

A bigot is someone who is intolerantly devoted to his or her own opinions and prejudices.

It is not arrogance but humility when the Christian accepts the word of his Savior when he declares that, “no one comes to the father except through me.”

Or when God speaks through the apostle and says, “Salvation is found in no one else, for there is no other name under heaven given to men by which we must be saved.” Acts 4:12

To Joseph the angel spoke about Mary, “She will give birth to a son, and you are to give him the name Jesus, because he will save his people from their sins.” Mt 1:21. Religion will never save a person from the penalty of his sins; he needs a Savior to do that

To the shepherds out in the fields at night, the angel said, “Do not be afraid. I bring you good news of great joy that will be for all the people. Today in the town of David a Savior has been born to you; he is Christ the Lord.” Lk 2:10-11.

When the aged Simeon held the infant Jesus in his arms he said, “For my eyes have seen your salvation.” Lk 2:30-32

When Abraham, out of obedience to God, was sacrificing his son Isaac as a brunt offering. Isaac asked him, “Where is the lamb for the burnt offering”? Abraham said these famous words, “God himself will provide the lamb for the burnt offering.” As he drew the knief above his head to plunge it into the heart of his son, the angel of the Lord stoped him. And sure enough, there in the thicket he saw a ram and sacrificed it-a type of Christ.

Salvation is not about competing religions, it is about the only sacrifice that has been made through which a man or womens sin can be forgiven.

Divine involvement in the full range of human existence.

Jesus experienced personally every developmental phase of human life from infancy through adulthood.

God knows intimately our struggles and stresses. Whatever trials or hurts me may experience in this life, whatever hopes or joys we may embrace, Jesus tasted them too. No stage of life, no situation we face is foreign to the God of Christmas.

“Since the children have flesh and blood, he too shared in their humanity. . . For this reason he had to be made like his brothers in every way, in order that he might become a merciful and faithful high priest in service to God, and that he might make atonement for the sins of the people. Because he himself suffered when he was tempted, he is able to help those who are being tempted.”

CHRISTMAS PROCLAIMS A MESSAGE OF HOPE AND REDEMPTION

“It is because of him (God) that you are in Christ Jesus, who has become for us wisdom from God-that is, our righteousness, holiness and redemption.”

One of the ancient church fathers said, “The son of God became a man to enable men to become sons of God.”

The point of the incarnation was not simply for God to express his love for human beings, to disclose his nature or walk in our midst, or even to identify with our struggles and yearnings. God entered this world as a human baby to fulfill his mission to rescue lost and sinful people. He took the name Jesus come which in Hebrew means “Yahweh saves.”

In the incarnation, God has fused himself with humanity, and now seeks to transform believers into the likeness of Jesus. God has come not simply to rescue us, but to remake this — a process by which we die to our old ways of living and are reborn into new existence in God’s family.

Christmas is a dangerous time. There is a real danger of missing its true meaning, in the midst of the most popular holiday of the year.

“It is because of him (God) that you are in Christ Jesus, who has become for us wisdom from God-that is, our righteousness, holiness and redemption.”

To the man or women of the world.

Most of them are given-over, without restraint, to all the merriment of the holiday season. This is the time they think to seek maximum pleasure, to get all you can out of Christmas.

Unfortunately, the joys of Christmas for them last only a short time. The the hang-over needs to be endured, the bills have to be paid, the excess weight must be lost, the discouragement has to be endured.

Christmas is an artificial high that requires a price to be paid. The joys are transient and short -lived, because the true lasting joy for which you seek is only found in God through Jesus Christ. The apostle Peter refers to the believer who is “filled with an inexpressible and glorious joy.”

The fun you seek at Christmas is a type or a sign or pointer to the greater joy, infinitely fulfilling and lasting for all eternity, which can be yours when you embrace the Christmas child as your Savior.

God has sent his Son, in the midst of Christmas. If you neglect to embrace this Savior, if you say no to God’s gift of eternal life through his Son, it will be the greatest tragedy of your life and Christmas to you will become not the joy you have sought from it, but rather a horrid reminder, for all eternity, of what you could of had.

To the true Christian, at Christmas time, will always think about what they are doing. They know that the only way to resist the tide of the world is to compare their actions to the word of God.

“One person esteems one day above another; another esteems every day alike. Let each be fully convinced in his own mind.” Ro 14:5

The Christian will be careful to make Jesus Christ the dominant theme.

They will seek to glorify Christ him in all they say and do.

They will recognize the unique role they have in modeling what is important about Christmas to a world that is determined to blot out Christ and to erase his memory from it forever.