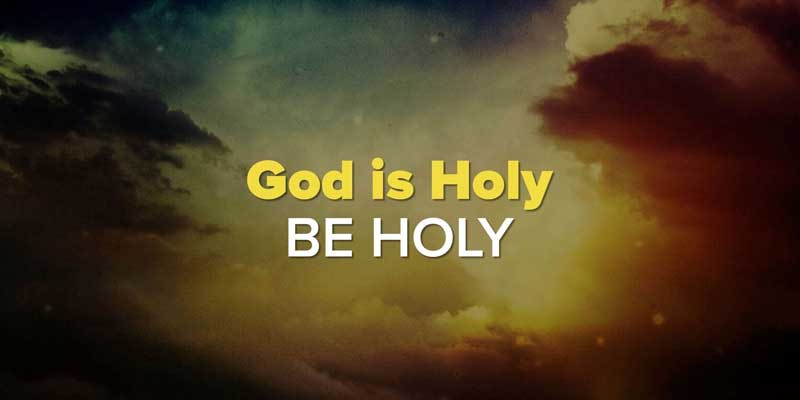 Pursue peace with all people, and holiness, without which no one will see the Lord.

15 But as he which hath called you is holy, so be ye holy in all manner of conversation; 16 Because it is written, Be ye holy; for I am holy. 17 And if ye call on the Father, who without respect of persons judgeth according to every man’s work, pass the time of your sojourning here in fear:

Brethren what can we say about this? How shall I speak about this evil in the house of my God? Should I lament like my God did to me in the year 2018 or should I be silent as the grave? For the people of my God has been deceived and cheated from the truth.

I Ogba Victor, a bond servant of Christ through the ministry of the Holy Spirit unto the Churches.

Brethren, do not listen to those who tell you that there is peace. For there is no peace.

Don’t listen to alter men who teach you soft lies or watered truths in order to make their message acceptable and make themselves look good to you. For they dilute the word of God and grope for honor from men and not from God; they are not men of God, they are men of themselves.

Read: Understanding the true meaning of the word – ‘Grace’

Don’t listen to those who teach faith without works. For the Bible has recorded that without work, faith is dead. James and Peter spoke about this false teaching.

Not long ago I had a brief chat with a theologian whom I also believe is a Pentecostal Pastor (I do not know for sure). He had commented on a post I made about producing the works of salvation and he replied that men who don’t produce those works will be saved by faith. To make his point clearer he quoted this passage:

But that no man is justified by the law in the sight of God, it is evident: for, The just shall live by faith.

Note: I agree to justification by faith; but then I presented him this passage from James:

You see that a person is considered righteous by what they do and not by faith alone.

Brethren, the same person who had no problem with interpreting the book of Galatians literally replied: “This is passage is confusing and hard to interpret…”; and then I asked him why. Why would a clear statement in James be hard to interpret but the one in Galatians is not. After some scriptural insight and exposition on this issue, he agreed that one most follow the other and I agreed. Faith must follow works but without works faith is dead.

Christians must know that the bible does not teach faith without works; but rather, faith in Jesus must come before our sacrifice will be acceptable. False teachers influenced by the spirits of hell teach that falsehood which has caused many not to live a holy life.

The bible does not teach that one will go to heaven by only placing his/her faith in Jesus. He or she must be born again, transformed by the power of the Holy Spirit and should produce fruits/works of the Spirit and live a holy life. Take a look at this scriptures:

And if you call on the Father, who without partiality judges according to each one’s work, conduct yourselves throughout the time of your [a]stay here in fear;

Let your light so shine before men, that they may see your good works and glorify your Father in heaven.

Therefore brethren, beware of those false teachers of faith without works and do not listen to them.

Brethren, don’t listen to those who tell you that once you are saved, you are free to continue living in sin and that God’s grace will cover you. There was grace but yet Ananias was killed by God for lying in Church.

Don’t listen to them. For they teach unfounded, unbiblical and dubious message sponsored by the powers of hell.

God is not happy

We must be born again said the Lord. We must live a holy and a sanctified life full of the Holy Spirit says the Holy Book. We must produce the works of the saved and we must live above sin and darkness. There is power to do these things, it was for it that grace was given. It is the Holy Spirit that gives us this power.

During the years of monopolized Christianity by the Roman Catholic, it was said that the Holy Spirit’s baptism and power manifestations was just for 3 generations from the disciples.

Because their hearts were wicked against God, no one was baptized by the Holy Spirit. For they killed many who stood out and burnt souls like William Tyndale who asked questions and did godly works. How could they have received the Holy Spirit?

As the reformation years started, from Luther down to Calvin and the minor reformations, faith as principle for salvation was preached and believed. Grace was also know by the churches; but the Holy Ghost baptism did not comeback all through those reformation years.

It wasn’t until John Wesley’s reformation which paved way for the holiness movement did the Holy Spirit manifestations and power come back.

Holiness people believed in grace; yes! They believed in justification by faith; yes!; but they also believed in sanctification and holiness. This doctrine is what the Bible teaches and it rebirth what Christendom believed was for only 3 generations. Power!!

As the 20th century began, the true power of the Holy Spirit was already manifesting among the Evangelicals who were an offshoot of the Holiness movement. But the baptism of fire they knew not, having not known the truth about it. But in those days, there were people who received the baptism of the Holy Ghost and power as history tells.

We must make haste and repent from our mistakes that times of refreshing may come from God.

God is still recruiting his Elects. God is still accepting men who will say “take me, wash me and make me holy”. For we were saved to live a holy life. Amen!

The harvest is passed, the summer is ended, and we are yet to be saved

Pride will kill you; Learn 10 ways to kill it first

The Joy of Suffering for Christ – Ephesians 3:1-6